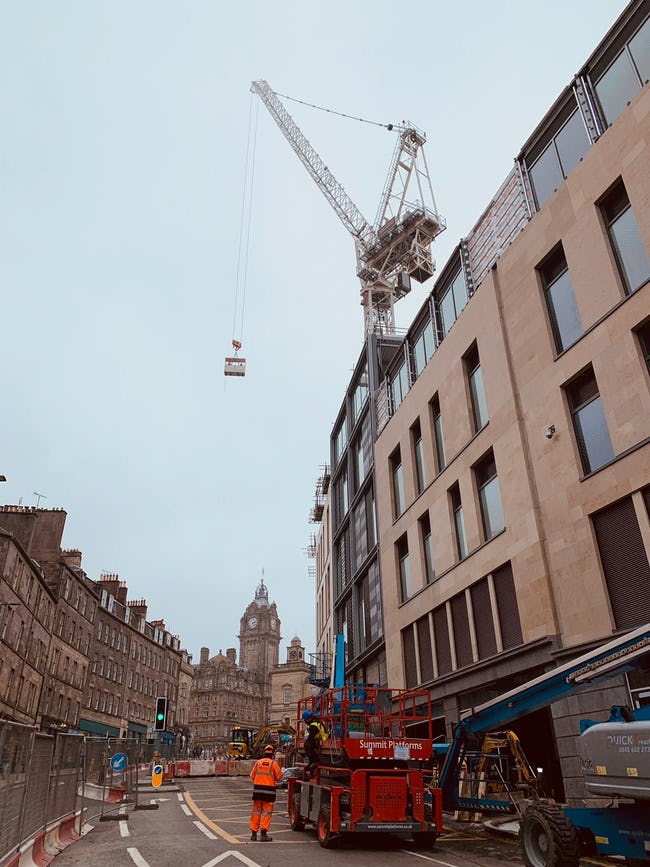 Following five years of construction, 17,378 tonnes of steel, and an estimated 2.835m working hours completed - the final crane at St James Quarter has officially been removed, revealing Edinburgh’s brand-new skyline to the people of Edinburgh and beyond.

To help with the big reveal our team granted STV reporter Vanessa Kennedy exclusive access to not only the new St James Quarter site but a birds-eye view of the breath-taking scenes of the Edinburgh skyline.

Vanessa was suited and booted, styling a hi-vis jacket, steel-capped boots and a hard hat for the occasion. Before taking to the skies, she was briefed by our highly trained construction team about the history of the site and how the cranes operate. After a quick cheer of encouragement from the team on the ground, Vanessa entered the crane’s bucket with a member of our construction team and was lifted over 60 metres in the air by the final crane left on the site.

Vanessa reported for STV News from the crane and said: “It’s one of the biggest regeneration projects in the UK, the St James Quarter is now just weeks away from opening its doors to the public. The city centre is strapping itself in for a new era in retail and it’s a transformation that hopes to elevate Edinburgh as a shopping destination.

“Over the last five years cranes like this one I am in at the moment, which is about 60 metres high have become an iconic part of Edinburgh’s skyline. This is the last one to be dismantled and from up here you can really appreciate the scale of this huge project.”

Removal of the Final Crane on Vimeo.
Since construction began, 13 cranes have shaped the city skyline and played a key role in the construction of the £1bn project. The removal of the final crane marks another celebratory milestone for St James Quarter, which is working towards opening at the end of June.

Reaching peaks of over 88m, the St James Quarter cranes grew almost as tall as the Capital’s iconic Calton Hill and, over the years, became a much-loved fixture of the Edinburgh skyline. The cranes became a local talking point within the city and lit up the sky at night – a permanent lightshow visible from far and wide.